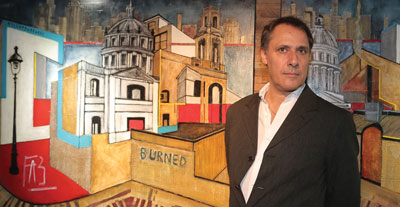 In 2011, Flavio Alejandro Bisciotti, an architect and designer from Argentina who’s also an artist, was commissioned to design furniture for the coffee shop along with designer Vanessa Schreiber.

When a space suddenly became available just behind the coffee shop, the duo decided to lease it as a shared office for each of their design companies. But the sleek interior also called out to Bisciotti as a perfect place for hosting special events and displaying fine art.

“I had the vision from the very beginning to use the space as a studio and gallery to showcase art, with the addition of a small kitchen to make intimate dinners to share with future clients, artists and friends,” he said.

The first art reception took place in November 2012, a show presented by Nike that included a private breakfast. The venue has since flourished as Bisciotti, a Venice resident, has formed more and more bonds in the local arts community (he recently invited local artists to hold a Venice Art Block preview exhibit).

“This is the first time in 24 years that I feel at home in my neighborhood,” he said of Venice.

Venice resident J.J. L’Heureux is a noted wildlife photographer whose annual treks to the Antarctic have produced photos displayed in museums around the world, but Bisciotti was drawn to her collages.

So for this show, L’Heureux (also a painter) displays a series of collages created from Italian cheese labels she discovered while visiting friends in Italy.

“Being an artist, I made my hosts collages using the Italian cheese from the cheeses we would enjoy together,” said L’Heureux. “Not having many materials, I made a color field background and stitched the labels onto the paper.”

At that time, many cheese companies were switching over to plastic packaging (due to new commercial standards) that lacked the old-world charm. Knowing these labels wouldn’t be around much longer, L’Heureux approached cheese manufacturers and was able to procure a treasure trove of exquisitely adorned traditional labels.

“FAB studio is a very hip space,” said Visser, who first met Bisciotti through Venice Art Block. “I love the natural elements — wood, concrete and the little dash of yellow. I have only known Flavio a short time, but intuition tells me that he is very much like the space … minus the dash of yellow.”

As the owner of original art by both painters, Johnson said, “There’s a relationship somehow between ‘La Suite Jany’ and Jansem’s paintings. Now, almost two years after their completion, it’s evident to me that the influence of living with his paintings has worked its way into my psyche and revealed itself through my own hand.”

Also invited to participate in the exhibit are Argentinean painter Javier De Aubeyzon and sculptor Hadiya Finley. The exhibit and opening reception are free to attend.

“Five-Artist Show” starts with a reception from 7 to 9:30 p.m. Friday and continues by appointment through Sept. 25 at FABstudio, 2001 Main St., Santa Monica.